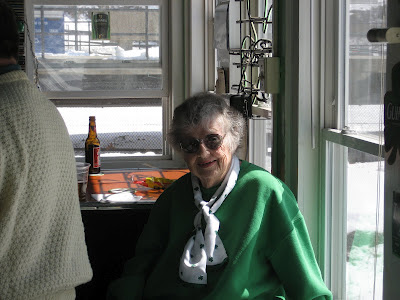 Dorothy M. Donnery - mother of Jim Donnery who christened Guinan's "Little Chapel" - died April 2, 2012.
The night I first met Dorothy solidified my commitment to writing a book about Guinan's. She was as eclectic and smart and compelling a character as I've ever met. She loved the Hudson River - loved watching the tankers and the freighters go by. She worked along its shores at the U.S. Military Academy, West Point for 39 years. When Jim returned home to visit Guinan's on Friday nights, she'd always have a sandwich and vanilla milk shake ready for him. At Guinan's she'd sip the occasional Michelob Light, though gin and champagne were her drinks of choice. If she grew tired of the barroom banter, she'd slip out to the car where she kept a blanket and sleep.
Dorothy suffered no fools; her smile was contagious.
The family has asked that memorial donations may be made to a charity of one's choice.
Photo courtesy Jim Donnery.
poems/quotes/tributes the parishioners west point

sheila said…
My thoughts are with you. I've learned to love your family through your book. Life is so strange, isn't it? Why are we here? Your book helped me understand the power of family... Thank you and I'm very sorry for the loss of a very special person. Sheila
May 31, 2012 at 10:25 PM 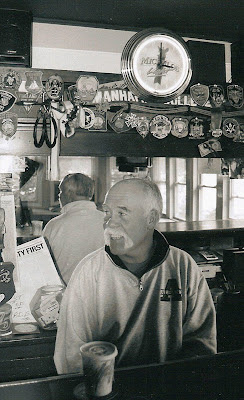