Appeal for Public Comment on Fate of Old Guinan's Building 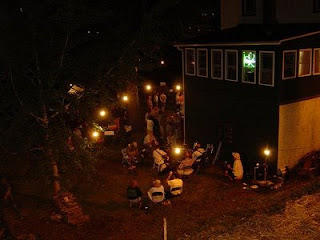 Message from the Committee to Preserve Community on Garrison's Landing:

First, thank you all for expressing your support! The Board of the Garrison Station Plaza was presented with a print copy of the petition including all the signers and comments at the meeting on June 14. As a result, the members of the Board agreed to revisit whether there should be a store or similar public venue housed in the building formerly known as “Guinan’s.” In July, the Board solicited for proposals and received several including one from Mary Ellen Yannitelli that was in keeping with the spirit of Guinan’s.

Ultimately they rejected all proposals for a new cafe or gathering spot similar to Guinan's. A Journal-News story by Barbara Livingston Nackman quotes several board members, one of whom says the board is now considering proposals for offices and a rental apartment. People familiar with the board's plans say it is close to or has already signed a contract with at least one new tenant. The board cited liability concerns but said little more. In the story, board member Hank Osborn, whose grandfather once owned the property, stood apart from the board and said he disagreed with its decision -- calling it a "magical space."

The new site plan for the building contains 2 offices and a rental apartment. The GSP Board is on the agenda to present this site plan to the Town of Philipstown Planning Board meeting Thursday, February 19 at 7:30 at the VFW on Kemble Ave. in Cold Spring, NY. The public can review the plan but not offer comment until the public hearing on Thursday, March 19.

If you have commentary that you would like to share, please plan on attending the meeting or you may write to:

Photo by Jim Donnery, 7/2/2005
events philipstown news the "next" chapel