Showing posts from September, 2008
Show all

Team Guinan To Ride On...Even in the Rain

Tomorrow morning at 5:30 a.m., Team Guinan will gather near the battlefields of Gettysburg, Pa. to mount our bikes and ride 275 miles to Manhattan. Forecasts say it will be raining with thunderstorms much of the three-day ride, but as they say, we'll ride on... until they won't let us.

We're part of a larger group -- Braking the Cycle -- but the seven of us are riding for someone you all loved well: John Guinan who did this ride on behalf of his wife, Mary Jane, and brother-in-law Tommy. And we're riding with John's daughter, our team leader, Kelly Guinan Preusser.

This map above shows you our terrain. (It's mostly uphill. Seriously. Or at least it feels that way.)

We owe many of you in this community and in our larger out-of-Garrison community a great deal of thanks for all you did to help us raise funds; we each needed $3500 to ride. So many …
Post a Comment
Read more

Alumni To Gather This Weekend for Garrison School's 100th Anniversary 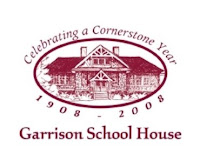 While Team Guinan is away on our 275-mile bike ride this weekend, alumni from around the country will gather to celebrate the 100th anniversary of the Garrison Union Free School.

Anita Prentice writes to say there will be people returning to Garrison for the festivities from California, Minnesota, and Colorado, as well as all over the East Coast.

Organizers of the event have put together a pretty slick social networking Web site here on Ning that links alumni and hosts videos, photos, links to local businesses and community institutions as well as details about this weekend's events.

Given the weather report, I expect we'll all be pedaling in the rain wishing we were there for Jeff's Dain's grilling Saturday night.
2 comments
Read more

Board Rejects Public Appeal for Cafe in Old Guinan's Spot

September 23, 2008
The board of the Garrison Station Plaza has rejected proposals for a new cafe or similar gathering spot at the building formerly known as Guinan's.

Today's Journal-News story by Barbara Livingston Nackman quotes several board members, one of whom says the board is now considering proposals for offices and a rental apartment. People familiar with the board's plans say it is close to or has already signed a contract with at least one new tenant.

The board's decision comes after several months of lobbying from many parts of the community for a general store or other enterprise that would serve the needs of commuters, tourists, cadets, boaters and residents. More than 1,000 people from this community and around the country signed a petition urging the board to "preserve our community's center and vitality and permit a new store."

The board cited liability concerns but said little more.

In the story, board member Hank Osborn, whose grandfather once owned the prope…
3 comments
Read more


GARRISON - Visions of a new café-bar at the former Guinan's Country Store and Pub were dashed this weekend when a property-owner group said it wants offices and housing instead.
Garrison Station Plaza expects to replace the former Guinan's with something totally different.

Mary Ellen Yannitelli, 42, a lifelong Garrison resident who knew and helped the Guinans run their family enterprise, had submitted plans for a café selling homestyle foods, drinks and convenience items at 7 Garrison Landing overlooking the Hudson River. Her plan was rejected, with the Station Plaza board citing liability concerns as the reason.

Instead, board members are considering proposals from two "well-established local businesses" for offices and a rental apartment, Presiden…
Post a Comment
Read more

September 11, 2008
Today marks seven years since the chain of events began unfolding to lead me to Garrison and to Guinan's. Each year on this day, I pull out Rev. Frank Geer's wonderful book -- Where Was God on September 11th? -- that he co-authored with John Horgan and turn to a specific passage. It reads:

"... the disaster itself had a ripple effect. The pain and the horror and the tragedy of it spread through the world like ripples on a pond when a pebble's been thrown in. But the healing travels back the other way, like the same ripples coming back towards the center after they've reached the shore."

A lot of healing of all sorts happened throughout the decades in a little green Irish pub nestled against the Hudson River. Later today I'll drive down to Garrison's Landing and stand on Frank's proverbial shores to give thanks in the spot where where the burning barrel once sat. It's there I can still hear the Little Chapel's heart beating strong.
2 comments
Read more
More posts